For investors and buyers, purchasing property in a golden postcode is a safe place to put their money and there are still a number of individuals who will only buy in these areas. Several of our private investors prefer to stay within this remit because it’s an established super-prime market with all the luxury amenities a buyer could want. I recently spoke to one of our investors about the merits of Bayswater, given the planned regeneration, but she wasn’t convinced, as the area was unfamiliar to her. For many investors, safeness is a priority because they are principally focusing on wealth preservation for future generations. They can sometimes be persuaded to move out a little if the returns are better and they can see significant investment in the area, but the opportunity must be absolutely right. For investors buying property to live in, they will consider moving a bit further out if the product is particularly stunning or they are buying it for their children. In this instance, areas like Soho, Fitzrovia and Covent Garden have great attraction.

The appeal of the golden postcodes, which cover Mayfair, Belgravia, Regent’s Park, Knightsbridge, Kensington and Chelsea, is not hard to understand. Prestigious and highly desirable, these exclusive postcodes of London are a magnet for the world’s super rich. They represent some of the finest living environments in the world where your neighbours are royalty. These are addresses to which the world’s wealthiest flock and buyers are prepared to pay a premium for property. In these areas, £6,000 per square foot for the best residences has either been achieved or is in sight for a number of super-prime schemes in the pipeline. Each postcode whether it’s Mayfair, Belgravia, Chelsea or Knightsbridge has its own unique appeal and offers a select range of highly desirable properties for purchase surrounded by homes of a similar calibre.  They are also home to the most exclusive galleries, restaurants, hotels, private members clubs and high-end shopping streets the capital has to offer. With London now the world’s most important city, the golden postcodes don’t just offer the finest living environments in the capital but also some of the best in the world and nothing else in London can quite compete, yet. 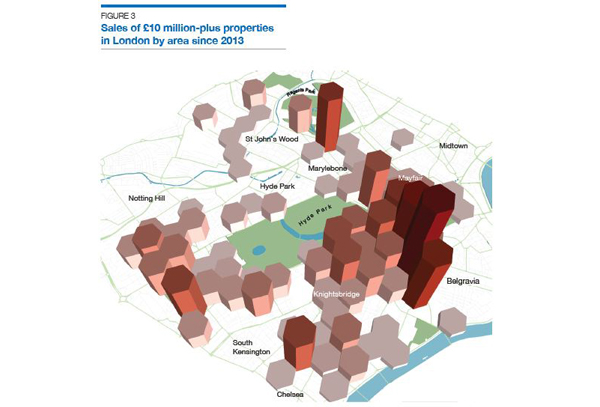 That said, other areas in London are catching up and there are pockets of super-prime property appearing in the less traditional super-prime postcodes. Bayswater is the area that is being massively pushed at the moment, as Queensway will be undergoing a complete makeover that will significantly lift the values in a very central location. Previously the less desirable side of the park, Bayswater has great architecture with attractive stucco terraces and garden squares that offer appealing residential development opportunities. It sits in between high value residential areas however, apart from a few high sales with The Lancasters setting the benchmark, not much has happened. With new developments coming through as well as the planned Queensway makeover, this is certainly an area to watch in the next few years. The other end of Oxford Street is also looking a hot position, with Centre Pointbeing developed and schemes such as Dukelease’s 61 Oxford Street just coming to market. This is contributing to the significant investment in the area and will also grow its values. Whilst Oxford Street comes with all the amenities that the wealthy buyer could want, it’s still a different proposition to what Mayfair has to offer. The challenge with these areas, and with Bayswater in particular, is how long it will take to reach the refined level of its neighbours. It could be 10 to 15 years for the area to realise its true values.

When we appraise a potential development, we don’t just consider its location. We look at the building, the surrounding structures and internal fabric to determine whether it presents the right opportunity for super-prime residential development. Whilst location is a huge draw for the global ultra high net worth buyer, it is just one ingredient in the super-prime mix. Working on a day-to-day basis with wealthy clients on some of the finest properties in the capital, we are very familiar with their exacting requirements. Buyers in this sector expect a great location, appealing architecture, world-class design with a quintessentially British feel, attention to detail that is second to none, extra amenities, a five star concierge service (if it’s an apartment) and something extra special on top. They pay close attention to space, proportion, design and the details on the inside and out. Beau House, the Jermyn Street development we are collaborating on with Dukelease is a good example of this. Situated in a highly desirable location, we have placed significant emphasis on creating the full package. We have designed the penthouse to make the most of the space and used British craftsmanship and elements of tailoring throughout, inspired by the heritage of the street. The penthouse also comes with a substantial roof terrace with fantastic views, which is a rarity in St James’s. Yet whilst location is important, it’s not the only influencing factor for buyers and will certainly not make up for any deficiencies elsewhere in a property. Buyers are much more discerning than that and that’s why we always look at the complete proposition, from the location right through to the tiniest bespoke detail.

The super-prime London market is fascinating right now as the areas surrounding the golden postcodes gather pace and advance quickly. However, it will take some time before they are close to competing on an even par with the most exclusive postcodes in London. I think the traditional super-prime areas will always command a premium above the rest, because for the world’s super wealthy, nothing beats the cachet of living in one of London’s most famous addresses. When this is coupled with the best in design and development, it’s a flawless and dynamic combination that’s hard to beat.